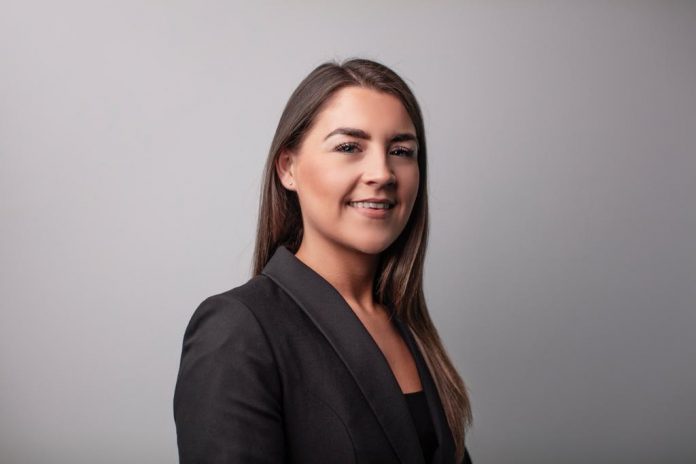 SolicitorChiara PieriScottish Legal News speaks to her about her career path, from being a paralegal to becoming a solicitor and then becoming the president of The Scottish Young Lawyers Association.

Chiara Pieri graduated in 2014 from Glasgow University with an LLB (with Italian) – and she plans to travel the world before starting her legal career. However, she was confronted with a dilemma when one firm offered her both a full-time job and the possibility to train the next year.

She said that she applied for a Digby Brown traineeship while working in a restaurant to save money so that she could travel.

“As I applied a year before they were due, they offered me a job in full-time paralegal with the possibility of starting a traineeship next year depending on my performance.”

It was an easy decision for the aspiring lawyer in a market where students struggle for years to find full-time work in legal services.

She stated that her plans to travel were “hastefully put aside”. She was able to fulfill her wanderlust by taking a trip around Southeast Asia, before she began her traineeship in September 2016.

“Fortunately, after I received my diploma, and before I started my traineeship at Digby Brown, it was possible to take some time off and travel around Thailand and Vietnam. It was an incredible experience.”

She was not certain, like many trainees in law, that the practice area in which she was working would be her main focus in the future. But she knew she had to take advantage of this opportunity.

Chiara was ready to make a change at the end of the period which had been dominated by personal injury litigation.

She stated that she was unsure if personal injury law was right for her at that stage of my career and that it was best to look for an opportunity as an NQ. When updating my CV, it became clear to me that I needed to think about what would make me stand out from other applicants for similar positions in law.

“One of my friends mentioned to me the Scottish Young Lawyers Association and that their AGM would be happening. Before I knew it, I was already on the train to Edinburgh to sign up. I volunteered to be a member of the non-executive board and was democratically elected.

Chiara assumed her role in May 2018, and she has been with the committee ever since. She rose through the ranks to become vice president, before being elected president at this years’ AGM. Although she joined the committee initially to be different in a market, the young solicitor is now passionate about her work.

Next week, she officially assumes her duties as president of SYLA.

Despite the pandemics, the SYLA still managed to host 35 virtual events for its members. The advantage of virtual gatherings for members is that they can be attended by anyone in the country. This is something the committee intends to keep. The organisation also launched blogs and a podcast last year.

Chiara stated that she plans to continue the work started last year, particularly the Connecting Trainees series and Coffee with the Committee series. She also said that she believes she is the best person to lead the committee through the challenges ahead “having spent three years on it.”

She has seen great success in her career through her tenure at the SYLA. It was a major factor in her being offered a job at Shepherd and Wedderburn where she is now a contentious construction lawyer.

She has three years of post-qualification experience and is keenly interested in dispute resolution. She recently completed the introduction course to the Chartered Institute of Arbitrators, which means she is now an associate of CiArb (SB), and hopes to be a member in future.

Although it is difficult to balance a complicated job with a high-ranking position on a committee, it’s not impossible.

“I live a very busy life as do many lawyers, but it’s something I enjoy.” My morning routine includes a lot of exercise before I start work. This clears my mind and prepares me for the day.

“When I feel stressed, it is best to spend quality time with my friends and loved ones. Now that everything is back to normal, I have made it a priority to do that.”